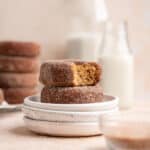 A classic fall favorite, these homemade vegan apple cider donuts are moist, fluffy, flavorful, and coated in cinnamon sugar. Baked instead of fried, they make the perfect cozy fall breakfast or dessert that's ready to be devoured in less than an hour!

There's truly nothing better than going apple picking at a local apple orchard and then ending the trip with hot apple cider and a freshly baked apple cider donut (or 3). It's a fall tradition that everyone should indulge in, honestly. BUT, sometimes orchards run out of these staple items and THAT'S where me and the best recipe for apple cider donuts ever comes to the rescue.

Aside from being delicious, moist treats, this donut recipe is vegan, dairy free, made without eggs, healthier than the traditional donut because they are baked, made in one bowl, and can be made gluten-free and oil-free.

Last thing...is it donuts or doughnuts? 🍩

Why you'll love this recipe

Apple Cider: it would be apple cider donuts without it! We'll be using cold pressed apple cider. The dark, cloudy unprocessed/unfiltered beverage in a plastic jug that hits shelves every fall season. This is NOT regular apple juice, hard cider (alcoholic), or apple cider vinegar!!

Leavening Agents: this recipe calls for both baking powder and baking soda to ensure these donuts are tender and fluffy.

Spices: apart from the apple cider, this blend of warming spices like cinnamon, nutmeg, ground ginger, all spice, cardamom, and a pinch of salt really give these apple cider donuts their traditional fall flavors.

Vegan Butter: I recommend use vegan butter sticks for this recipe. We'll be using the vegan butter in both the batter and to help the cinnamon sugar stick to the baked donuts.

Egg Replacer: for binding, moisture, and rising! I find that Bob Red Mills egg replacer powder works great for this recipe because the starches help to tenderize the dough. Flax eggs, apple sauce, mashed banana or pumpkin puree all work perfectly as well.

Vegan Buttermilk: for it's moisture, flavor, and rising properties! Vegan buttermilk is easily made by combining apple cider vinegar (or lemon juice or white vinegar) with unsweetened & unflavored non-dairy milk. I personally like soy or almond milk for this recipe.

Vanilla Extract: wouldn't be a baked good without it! Use store bought or homemade vanilla extract.

Most importantly, you will need at least one donut pan. I prefer these non-stick ones for super easy clean up! If you're not interested in purchasing a donut pan, no worries - jump to the variations section for other ways to use this donut batter!

Like with any baking, you’ll also need basic kitchen equipment such as a mixing bowl, utensils, and a wire cooling rack. I also highly recommend getting a kitchen scale for most accurate results.

These donuts are incredibly easy to make, with the batter being made in just one bowl and do not require any resting or rising time!

Start by reducing your apple cider. In a medium sauce pan, lightly boil apple cider over medium heat until there's ½ cup remaining. Start checking the amount of apple cider you have left after 10 minutes of simmering, then check every 5 minutes until you have ½ cup remaining. It should take 20-30 minutes to reduce down. Pour into a bowl or measuring cup and allow to cool for at least 10 minutes.

Preheat the oven to 350 degrees F and grease your donut pan well. If you don't have a donut pan, check out either the variations & substitutions section or the FAQ section.

Prep the egg replacer of your choice and vegan buttermilk. Let both sit for 5 minutes.

Using a piping bag, a ziploc bag with one of the corners cut off by ½ inch, or just using a spoon, fill each of the donut cavities ¾ of the way full with batter. Bake for 9-11 minutes, or until a toothpick comes out clean.

I love these cinnamon sugar donuts as they are but there are definitely a few changes you could make, if needed, and they'd still be perfect!

Make these gluten free vegan apple cider donuts by using 1-to-1 gluten free flour. I do not recommend using oat flour or almond flour, as they absorb liquid quite differently and it would not be an easy swap.

Use a mini donut pan to make mini apple cider donuts! Bake time should be reduced by 2-3 minutes, or as soon as a toothpick comes out clean.

Make vegan apple cider munchkins (donut holes) by dividing the batter across a mini muffin pan. Fill the greased mini muffin cavities ⅔ full and bake at 375°F for 8 minutes, or until a toothpick comes out clean.

Turn these into vegan apple cider muffins!!! Divide the batter across a greased or lined muffin tin, filling each cavity ¾ full. Bake for 18-22 minutes at 350°F, or until a toothpick comes out clean.

You can use regular non-dairy milk instead of vegan buttermilk.

Make this recipe oil-free swapping out the vegan butter with unsweetened applesauce at 1:1 ratio. They will be slightly more dense!

Feel free to dip the donuts in a maple glaze instead of cinnamon sugar. To make the maple glaze, whisk together 1 cup of powdered sugar, 2 ½ tablespoons non-dairy milk, 1 ½ tablespoons maple syrup, and 1 teaspoon vanilla.

If you don't have or can't find apple cider, you could use sparkling apple cider instead.

If your store sells already boiled apple cider, you can just use ½ cup of that and totally skip over the reduction step.

Melted coconut oil can be used in place of vegan butter. If you do this, be sure all ingredients are at room temperature, otherwise the coconut oil will seize up.

Refrigerator: This isn't my favorite method, as it'll cause them to dry out but you can store baked donut in an airtight container for up to 5 days.

Freezer: These apple cider donuts are freezer-friendly! Allow the donuts to cool completely first then freeze them in an airtight container for up to 1 month. Allow to thaw at room temperature before enjoying.

Do I have to reduce the apple cider?

You don't have to BUT the flavor is so much better when you do! It gives a much more concentrated apple flavor.

You could use sparkling apple cider! I would not recommend using apple juice.

How can I make donuts without a donut pan?

I LOVE this question. If you don't have a donut pan you can use a muffin pan and aluminum foil. Grease the muffin pan then take a piece of aluminum foil, wrap it around your finger to form a cylinder shape, then press into the center of a muffin tin cavity so it's standing up straight, and pour the batter in. The aluminum foil should stick because you greased it but you could press it down a little bit so it has a flat bottom.

Can I fry this recipe?

Because the batter is wet rather than not a moldable dough, I would not recommend trying to fry or air fry this recipe.

These vegan apple cider donuts that are moist, fluffy, flavorful, and coated in cinnamon sugar. Baked instead of fried, they make the perfect cozy fall breakfast or dessert that's ready to be devoured in less than an hour!

Store leftovers in an airtight container at room temperature for up to 4 days, in the fridge for up to 5 days, or in the freezer for up to 1 month.

You can reduce the apple cider the night before you'd like to bake the donuts. I do not recommend making the entire batter ahead of time, as the donuts will not rise as well.

You can transform this recipe into muffins, mini donuts, or munchkins (donut holes). Please refer to the variations & substitutions section.

Nutritional values are estimates only. Please see our full disclosure.

Did you make this recipe? Leave any questions or thoughts below: Cancel reply

Welcome to Pinch of Parsley, thank you so so much for being here! On my page you'll find a wide range of delicious vegan recipes that are suitable for both beginners and long-time home cooks. I can't wait for you to start cooking with me! Read more about me here!

We use cookies on our website to give you the most relevant experience by remembering your preferences and repeat visits. By clicking “Accept All”, you consent to the use of ALL the cookies. However, you may visit "Cookie Settings" to provide a controlled consent.
Cookie SettingsAccept All
Manage consent

This website uses cookies to improve your experience while you navigate through the website. Out of these, the cookies that are categorized as necessary are stored on your browser as they are essential for the working of basic functionalities of the website. We also use third-party cookies that help us analyze and understand how you use this website. These cookies will be stored in your browser only with your consent. You also have the option to opt-out of these cookies. But opting out of some of these cookies may affect your browsing experience.
Necessary Always Enabled
Necessary cookies are absolutely essential for the website to function properly. These cookies ensure basic functionalities and security features of the website, anonymously.
Functional
Functional cookies help to perform certain functionalities like sharing the content of the website on social media platforms, collect feedbacks, and other third-party features.
Performance
Performance cookies are used to understand and analyze the key performance indexes of the website which helps in delivering a better user experience for the visitors.
Analytics
Analytical cookies are used to understand how visitors interact with the website. These cookies help provide information on metrics the number of visitors, bounce rate, traffic source, etc.
Advertisement
Advertisement cookies are used to provide visitors with relevant ads and marketing campaigns. These cookies track visitors across websites and collect information to provide customized ads.
Others
Other uncategorized cookies are those that are being analyzed and have not been classified into a category as yet.
SAVE & ACCEPT